I survived Morningland - renamed the Monestary - in Long Beach, CA. It is a religious cult.

My name is Frankie. I've gone by many names, not always by choice. My statement. For Immediate Release 4/24/22

The story is still available as an exclusive as of the sending of this release.

My relationship with my twin did not survive, but I have the support of my mother in stepping forward.
Though the original founders died long ago, Dan Sperato in 1976 and Patricia Sperato in 2003, there are three people they trained who participated in the destruction of my family still living illegally at 2600 E. 7th St., Long Beach, CA.

There is no shortage of amazement with the lawyer for the church having been Ed Masry (of Erin Brochovich fame, now deceased), a bribery charge involving state officials, a raid by the California Attorney General, a bomb scare that nearly took my life, sexual trafficking and family separation.
Finally confronting this life trauma was like walking across the Sahara Desert alone. I assure you that the book will reveal a shocking story that has never been told.

and writes publishes the Cult Madness News column on Substack.

Some articles related to Morningland have been compiled by previous members at
http://ex-morninglanders.com

If you are a trusted news agency who will handle this story properly,

this exclusive story is ready to be carried to the world.

It is a cautionary tale and warning on the dangers of religious cults,

which humanity still has not truly learned.

🗞 The #OccupyCults tag is to call attention to various cult stories and allow interested press to see a feed easily for wider dissemination of vital info survivors and activists are putting out. Add the tag to your news article or any cult expose' today. 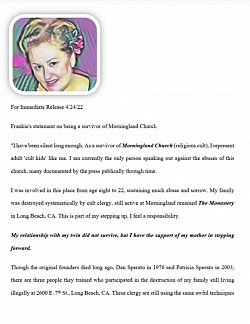 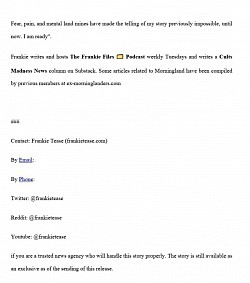 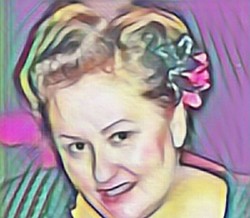